Bremen — what to see, what to try

Not one generation grew up on a fairy tale about a troubadour and his friends musicians.

Accidentally stumbled upon an advertising newsletter in the mail, which offered direct flights from Moscow to Bremen for only 170 euros, my family and I did not hesitate to go home to the Bremen town musicians. 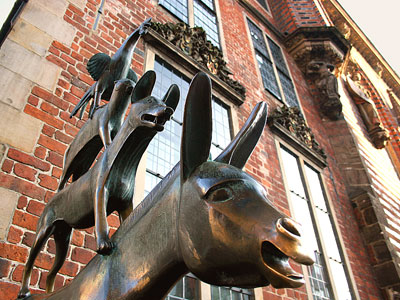 Three hours of flight passed unnoticed, and due to the time difference only one hour was lost. The day is in full swing, and we are already a thousand kilometers away from home. And here is the Bremen Town Musicians: a rooster, a cat, a dog, and a donkey.

Meet us right at the airport.

True, they are very old — they are portrayed by far from young actors.

Either they earn money because the pension in Germany is not so high, or for fun.

At the exit from the airport we see tram tracks. It turns out that the tram takes you to the city center in just 10 minutes. The taxi stand is right there, but on the tram it is somehow more interesting.

In addition, it turned out that it passes just past our hotel.

We chose «Grand Hotel«Than were very pleased. Everything here was within walking distance. Without losing time, we go for a walk.

Our way is in the heart of the city — to the Market Square.

On the way, our attention was caught by a nice restaurant. Unsere stäv, which serves the famous Kelsh. Beer kelsh It has always been famous for being cooked only in Cologne, and it was possible to try it only here — it could not be exported not only to other countries, but to other cities in Germany. Now you can try Kelsh not only in Cologne.

True, there is a risk of getting something far from ideal.

But in Bremen, it seems everything is by the rules.

It is poured from a wooden barrel with a tap so that less foam is formed.

As it should be, it is served in the traditionally narrow thin-walled cylindrical glasses with a volume of 0.2 liters, called “barbell«.

It is believed that it is in such dishes that this beer is best reveals its flavor.

Such an interesting combination!

Fortified, we continue our way to the Market Square. Here is a very beautiful building of the Town Hall and the Cathedral of St. Peter, built in the XI century.

A symbol of the city — a 6-meter statue of the knight Roland. As the legend goes, Bremen is free and independent as long as it is guarded by Roland.

True, the locals say that the second statue is stored in the basements, which can quickly replace the first one in case of unforeseen circumstances.

And now, literally a few meters from Roland, stands a monument to the Bremen Town Musicians.

Citizens love their heroes very much. All sorts of interpretations on this subject are scattered around Bremen.

There is even a local belief: if you hold onto the legs of an ass and make a wish, it will come true.

However, it is likely to hear the remark of Bremen behind his back: again, one donkey holds the other!

Walking along one of the pedestrian streets adjacent to the Market Square, we discovered a sculptural composition of bronze pigs, svinopas and dogs.

It turns out that in the Middle Ages, herds of pigs were driven into this pasture along this street, and the street was called Skotoprogonnaya.

And when they returned, local confectioners, bakers and brewers threw garbage and slop into the street.

It was a great meal for pigs.

And for the townspeople — free cleaning of the city from food waste.

We find another interesting place on the square — the oldest wine cellar in Germany Bremer ratskeller («Cellar at the town hall«), Located in the basement of the Town Hall. Its construction began at the beginning of the 15th century and since that time German wines are stored and sold here.

AT Bremer ratskeller the world’s largest collection of German wines has been collected — about 650 varieties; there is probably no such choice of high-quality German wine anywhere else in the world.

Here the keg of Germany’s oldest wine is rosé, from Rüdesheim am Rhein, made in 1653.

Much of the cellar is occupied by a restaurant. Virtually all the wines from the collection can be tried, making Ratskeller highly popular attraction Bremen.

And you can buy wine with you in a small shop. The bottles show the emblem of Bremen — the key.

This symbol is scattered throughout the city.

He stands out especially on the manhole covers.

Later in the evening we wander into a small a pub.

A friendly hostess told a local legend: in ancient times, there was a workshop for repairing keyboards from harpsichords. In order not to damage the expensive instrument, the workshop couriers were forbidden to drink alcohol. And the time waiting waited slowly.

So they came up with drinking schnapps unnoticeably — pouring it into a kerosene lamp.

The tradition has been preserved.

Entertainment is called «sip of the lamp«.

This drink, with a strength of 38 degrees, is made according to the secret recipe of the Swedish family doctor.

The taste is extremely strong, bitter-pepper.

But the mood raises.

Bremen not only beautiful and fabulous, it is also a sweet city. This is where the chocolate factory is located. Hachez. Confectioner Josef Emil Hashe opened his own chocolate company in 1890.

From the very beginning to this day, Hachez does not use artificial flavors or vanillin. Only natural ingredients. Vanilla is brought from Madagascar, almonds are delivered from Italy, walnuts from California and France, pistachios from Iran.

And most importantly, the highest quality cocoa beans!

They are brought from those regions of Ecuador and Venezuela, which for many centuries have been producing the best crop in the world.

All raw materials are processed manually.

For the whole chocolate processing cycle Hachez It takes about 100 hours.

For comparison: in ordinary factories, this process takes only 8 hours.

The most popular product from the range Hachez — chocolate in the shape of the finest leaves.

The idea to make chocolate of this form came to Mr. Noku’s partner, Hasha’s partner and the grandfather of the current owner of the company, during a walk in the autumn park.

That was in 1923. By the way Hachez It is not part of any global concern, but is a family enterprise.

So, in search of souvenirs, be sure to check out the cozy two-story shop Hachez near the Market Square.

Upon returning home, it turned out that in Moscow you can buy this chocolate. I found it in «Alphabet of taste» next to the house.

But the choice, of course, is much more modest.

Dinner. Backstage Daimler Mercedes-Benz and the most famous beer

Dinner decide in the oldest quarter of the city — the famous Schnoor. The streets are narrow.

The widest of them is only 70 centimeters, it is even surprising how so many souvenir shops fit on it. Each offers something special, special. We meet a charming little Christmas-tree shop that operates all year round.

In front of the entrance, despite the summer, there is a snowman. There is also a tiny hotel with only 3 rooms.

They say you need to book it for the year ahead.

Around antique shops, pubs and restaurants. In one of them we try the famous Beck’s beer, named after the Bremen brewer Heinrich Beck.

Today’s brand Beck’s sold in 125 countries, among the top ten world-famous German brands, along with Mercedes, Adidas and BMW, as well as in the top three brands-leaders of world imported beer.

And in Bremen one of the concern’s factories is located Daimler Mercedes-Benz-Werke.

Cars of the classes SL, SLK, GLK and S are assembled here. Mercedes fans have the unique opportunity to look behind the scenes and witness the creation of a car.

Maybe even your own. The factory has a salon where the purchase of a car is made. A polygon is also located here, where, together with an instructor, you can test a car in all kinds of extreme situations: climbing and descending the stairs, driving along bumps and roads, inclined at 45 degrees, ascending the hill at 70 degrees.

But the worst thing is the descent at an angle of 80 degrees.

In general, with a lack of adrenaline problems will not.

2018-11-09
admin
Предыдущий A white pimple has appeared on the eyelid — what kind of education is it?
Следующий Madrid: the sights of the Spanish capital