Lifetime freshly baked bread not so long, but I want to extend its freshness to both the manufacturer and the buyer.

How packaging affects the quality of bread, how to store bread at home and what producers do with bread that has expired is about Gastronom.ru talked to the chief technologist Prokhleb LLC Ivan Nikolenko. 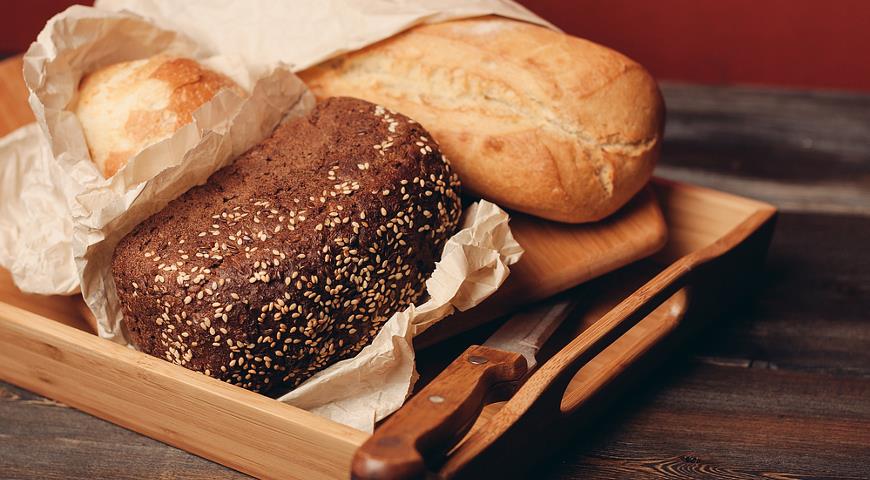 Ivan, the question is simple: the main criterion for fresh bread?
Under the freshness must be understood precisely the softness of bread.

You can determine the quality of bread in appearance?
For traditional breads, such as, sliced ​​loaf, bread Darnytskyi and Ukrainian are the following characteristics. The loaf should have a thin crust, not burnt, the bottom is clean, free from contamination.

The surface of the loaf should be glossy and smooth, without explosions and cracks.

On the cut, the bread should be uniformly porous, with pores of the same size.

The cut should be smooth, the bread should not crumble at the cut.

What are the storage times for bread?
The unpacked bread produced in the traditional sponge manner is a perishable product. For example, a long loaf is stored for only 24 hours, in a package for up to 72 hours.

Black bread unpacked — 36 hours, and in the package up to 48 hours. Of course, with the use of preservatives in recipes, bread storage times are increased.

In the package, a sliced ​​loaf can be stored for up to 96 hours, and rye-wheat bread — up to 120 hours (Other manufacturers manage to increase the shelf life of bread to 12 days and this is not the limit — approx. ed.)

How does the packaging affect the quality of bread?

Is it good that bread is packaged in polypropylene, polyethylene, polyvinyl chloride (PVC)?
Oddly enough, the packaging of bread — this was originally the initiative of manufacturers: it was believed that such packaging retains the freshness of bread. But it turned out that in such a package, the bread becomes damp and moldy.

The manufacturers understood this; they are ready and would be happy to abandon this method of packaging, but regulatory authorities and trade organizations are against.

They force manufacturers to pack bread.

If the bread instantly stale, what does that mean?
On the technology of production of this type of bread. Bread, made straight or accelerated, hardens faster than bread, cooked in the traditional, sponge method. (About accelerated and sponge bread production methods — read here.)

And if the bread, on the contrary, molds quickly?
As a rule, bread comes out of the oven sterile.

It can be infected with mold during packaging.

Therefore, one of the reasons may be unsanitary conditions at the enterprise itself — dirty hands in the process of packaging or production equipment were not processed properly.

Secondly, mold can appear as a result of improper transportation or storage of finished products already in the store. The bread will start to grow mold if the storage temperature is above 25ºС and the humidity exceeds 75%.

For example, good bread was brought from the bakery to the store, but it was put on the shelves next to the batteries in the store.

As a result, the bread warmed up and began to mold.

So how to store bread?
It is best to store the bread in the refrigerator or in the bread box, treated with vinegar.

At low temperature, bread is more protected from microbiological spoilage. Although its freshness may deteriorate, it may become more severe.

However, these properties are restored, if you give the bread a little to lie at room temperature.

It is better not to store the bread in the purchased package, but transfer it to a clean plastic bag (or in the bread box).

Interestingly, how do manufacturers process bread that has expired?
In the USSR, there were ways of processing bread.

Defective bread and bread, which has expired, but without mold or any signs of spoilage and pollution, was brought back from the stores to the bakery, sorted, soaked with water and prepared so-called lotion.

Then it was used to produce some types of rye-wheat bread.

Now these technologies are not used, because the initial raw materials are not as high-quality as before.

If in the same way to process modern bread at the output, bread will be two to three times worse in quality.

What expired bread simply throw out?
Not.

Now go the other way. Bread, which has expired, is processed into rusk crumbs and sold to bread crumbs manufacturers.

If necessary, they divide it into fractions (sifted), treated with dyes and get breadcrumbs.

What to cook from stale bread — recipes from Alexander Ilyin 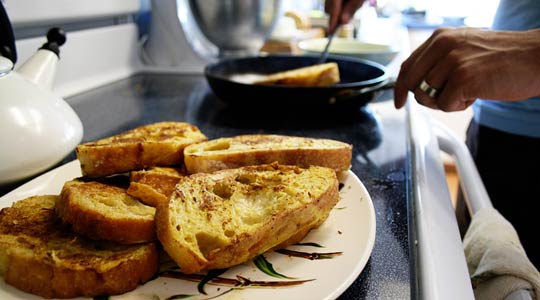 Put a saucepan over 2 liters of cold water over medium heat. Peel the onion, cut it in half and drop it into the water.

Add bay leaf, a thick circle of lemon, 2-3 sprigs of parsley. Lightly salt. When it boils, reduce the heat to minimum, cover with a lid and leave for 15 minutes.

Meanwhile, chop 1 carrot, half a zucchini and half an eggplant, peel a clove of garlic and cut it in half, beat a bunch of green basil in a blender with 2-3 tbsp. l olive oil and a pinch of salt, cut into thin slices half of a rifted loaf and coarsely prick them.

Strain the vegetable broth, and put the empty pan on the fire. After a minute, add a little olive oil, then put vegetables, garlic and bread, fry them, stirring continuously for 2 minutes.

Pour the vegetable broth, let it boil and cook for another 5 minutes. Season the finished soup with pepper, pour into plates, add to each a full spoonful of basil pesto.

Sandwiches from yesterday’s Borodinsky with sprats

Cut half a loaf of Borodino bread into slices 0.5 cm thick, cut off the crusts, lightly grease each slice with butter.

Place the bread on a baking sheet and send it to the oven, preheated to 150ºС, for 10 minutes. Meanwhile, boil 4 eggs hard-boiled, beat 50 g of butter with 1 tbsp. l spicy mustard — and open a can of sprat. Remove the toasts from the oven, put them on a plate and let cool for a couple of minutes.

Cool eggs under running water, peel and coarsely chop with a knife. Brush half of the toasted slices of bread with a mixture of butter and mustard, sprinkle with chopped egg, put 2 sprats in each. Cover with remaining toast.

Squeeze the sandwiches lightly, cut with a sharp knife with a diagonal.

Half of the loaf of yesterday’s ciabatta cut into thick chunks, large, break them and put on a baking sheet. Crush the garlic clove with a garlic press and whisk it in a bowl with a fork with 2-3 tbsp. l olive oil. Pour ciabatta pieces with this oil, mix, then make space in the center of the pan, cut 2 sweet peppers in half and place the halves on the pan, cut down.

Put the bread and pepper in the oven, preheated to 180ºС for 10 minutes.

In the meantime, cut the packaging of cherry tomatoes in circles, put them in a large bowl, squeeze half a lemon in the same place, pour over olive oil, salt, pepper and mix well.

When the bread and pepper are fried, put the bread on a plate so that it gets a little cold, and the pepper into a plastic bag.

After 5 minutes, remove the pepper, remove the skin from it and narvite into strips. Add the pepper and the cooled bread to the tomatoes, mix, so that the bread is soaked with the secreted juices.

Serve, sprinkle with herbs to taste.

Thinly slice half a baguette. Brush the bottom and sides of the flat baking dish with a piece of butter. In a large bowl, stir in half a cup of cream, 1 tbsp. l white sugar and 1 fresh yolk.

Pour in a glass of liqueurBaileysOr another cream liqueur.

In the resulting mixture, moisten the slices of baguette, put half in the form, sprinkle with 1 tbsp. l good raisins. Put the remaining baguette slices on top, scatter 10-12 small pieces of butter on top and sprinkle with a little sugar.

5 minutes before readiness remove the foil.

Pound in a mortar with a pestle on a large pinch of jira, coriander and 2 black peppercorns, add 25-30 g of softened butter and mix. Transfer the spice oil from the mortar to a plate of bread. Stir so that all the pieces are covered with oil.

Heat a dry frying pan, put pieces of bread into it. Fry, stirring, for a couple of minutes, then add 4 eggs and chop up a piece of cheese in the pan.

Continue cooking in the same mode, stirring until the eggs grab. Arrange on plates. 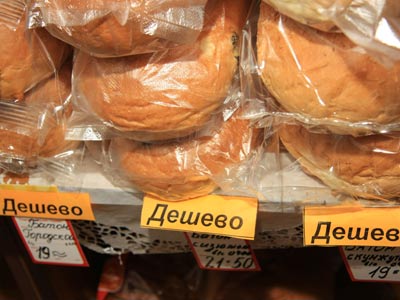 According to the survey Gastronom.ru “What product of the first necessity you are not satisfied with the most”, won the bread: 36% of our readers. 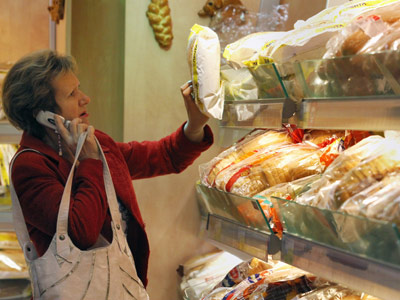 Where in Moscow to buy delicious bread

Our goal is to understand what kind of bread we eat, why in most cases it is of dubious quality, where to get good bread, how to bake bread at home.