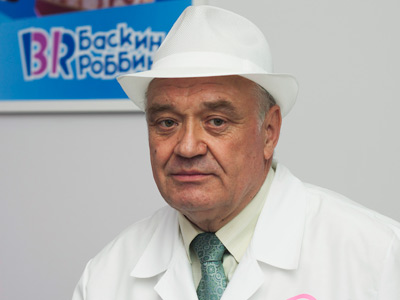 Vladimir Pimonovich He has been working in a factory since it opened and loves ice cream to such an extent that he even praises it in verse. For example:

When the gods gathered for a feast, what could they wish for?
Ice cream Baskin-Robbins they would order.
And the clear-winged cupids would carry him on all sides.
To spoil without fear of a figure, Apollo himself would taste it!
There is no vegetable fat in it, and sugar is only from cane.
The best fruits in the world are frozen slightly in it.
Venus b has become all beautiful.

But Aphrodite — only slimmer!
He did not eat you — in vain.

Egorov reads this poem to us at the end of the excursion, out loud and from memory. An hour before that, he meets us at the entrance, issues passes and leads to the factory.

He wears a special hat, calls her a guided tour and says that she is fifteen years old. Actually, as much as the factory. It was built five years, supervised construction Ministry of Medium Machine Building, and commanded the real colonel-general.

Egorov says that thanks to the general’s opinion everything is built for the ages. 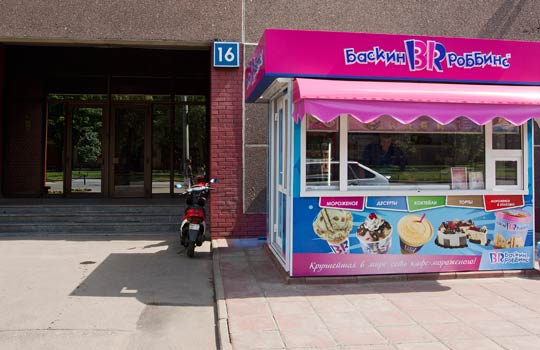 Ice-cream production is not just a complicated business, but it requires completely medical purity.

We dress up in dressing gowns with long sleeves, seized cuffs on elastic bands, we stretch disposable caps on our heads, and boot covers on our legs.

For workers, by the way, the rules are even stricter. They completely change into sterile state-owned clothes, never take off their gloves while working — and remove all their jewelry, with the exception of wedding rings.

The clock is also removed. Just in case, the mixture for ice cream is also scanned by metal detectors, so that God forbid. In the case of the discovery of this, the conveyor itself stops, and the whole lot is ruthlessly thrown out.

Although in 15 years this happened only twice, and then at the very beginning, when the security system was not yet properly rebuilt. 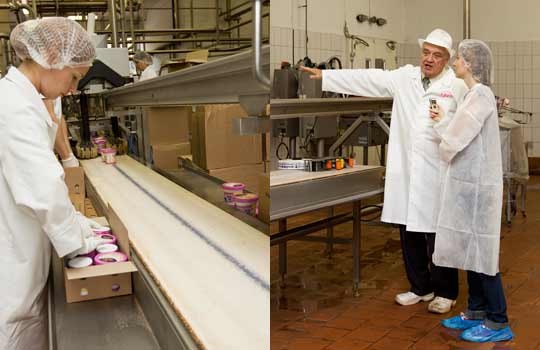 Workwear at work is an important and necessary thing for everyone.

In general, the process of making ice cream is fully automated and mechanized. Ice cream itself can be seen only for a few seconds at the moment when it enters the package.

We have seen it with our own eyes, and are ready to confirm — yes, it is so.

It all begins with the preparation and production of the three main components of ice cream: cream, milk and sugar syrup.

Cream is prepared three times a week, milk is two, and syrup — only on Thursdays. 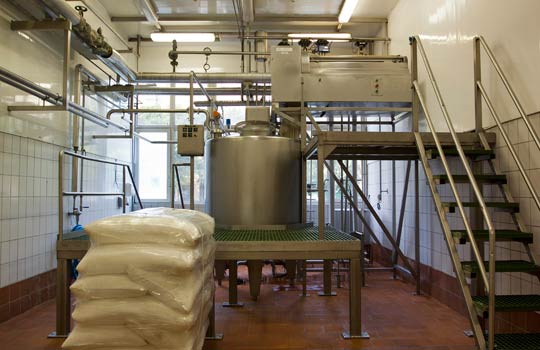 44% fat cream comes to the factory from New Zealand and Estonia, frozen, in packs of 25-28 kilograms.

The director notes with regret that you will not find cream of such quality in Russia, so you have to bring God knows where.

The operator frees the cream from the packaging, and sends the cream bricks to a special machine called the “pusher”. He pushes the briquettes under the rotating knife. The cream is crushed into small pieces, then through an inclined bunker into the tank, in the walls of which water is constantly circulating at a temperature of 45-50 ° C, and in the center tirelessly stirring mixer.

Pieces of frozen cream come into contact with hot walls and are transferred from a solid to a liquid state. 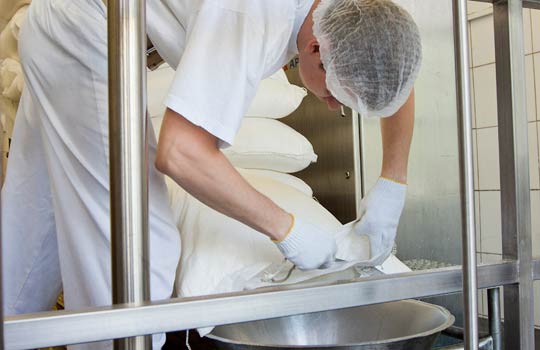 In another workshop sugar syrup and concentrated skimmed milk are prepared. Everything controls the computer.

Water is poured into the tank, sugar is added through the pipeline system, the agitator mixes sugar and water — this is how a concentrated sugar syrup is obtained. Concentrated milk is approximately the same: the mixer mixes skimmed milk powder with water.

But after that, the milk on a special apparatus, deaerator, is also freed from air bubbles and odors, and then cooled to 1-2 ° C.

The fact is that at + 3.8 ° C, the vital activity of the microbes ceases, and therefore the milk does not deteriorate. 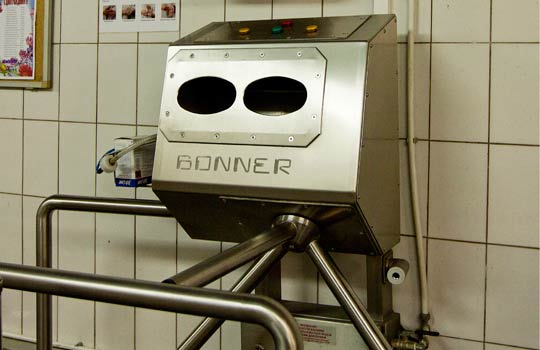 If you do not wash your hands, there is no further passage

One of the most amazing things in the factory Baskin-Robbins — washing hands.

We put our palms in round holes in the wall of the cabinet and feel the dose of alcohol solution plop on each of them.

The bottom line is that unless you disinfect your hands in this way, the automatic spinner simply will not let you go to the next workshop. 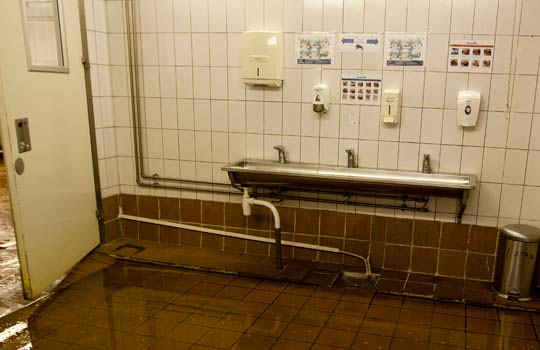 But this room is designed for complete disinfection. On the floor — not some kind of puddle there, but a special solution.

So now we have clean not only hands, but also the soles of shoes. 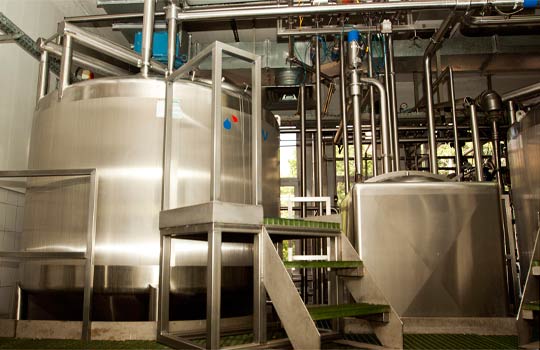 Here are preparing mixtures for ice cream. Here is a five ton tank. Strictly according to the recipe it serves cream, sugar, skimmed milk and water.

They are mixed, then a stabilizer and an emulsifier are added to them through an intermediate tank. If you don’t know, ice cream is 50% air, and it is these substances that help saturate the ice cream with air, and then keep it in suspension, do not allow it to fall. The mixture is stirred, heating to 85-87 ° C, and kept at this temperature for 26 seconds (so that all the microbes that could get into the mixture, died).

Strictly speaking, this is the very pasteurization. 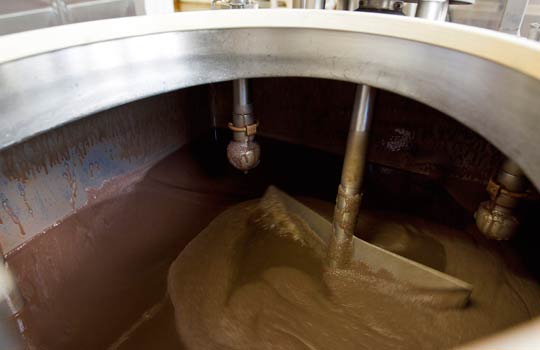 Then the mixture is made homogeneous or, in professional terms, homogenized. Balls of butter are crushed into very small drops, which are evenly distributed throughout the mass of the mixture and does not float.

After that, the mixture is cooled and sent to the so-called maturation. The essence of this physicochemical process escaped our understanding, but something else is important — as a result, the molecules of milk protein increase in size and become more, so to speak, loose.

Therefore, ice cream in the end will be more uniform and airy.

By the way, in the production of ice cream since the USSR such a stage as maturation was not. 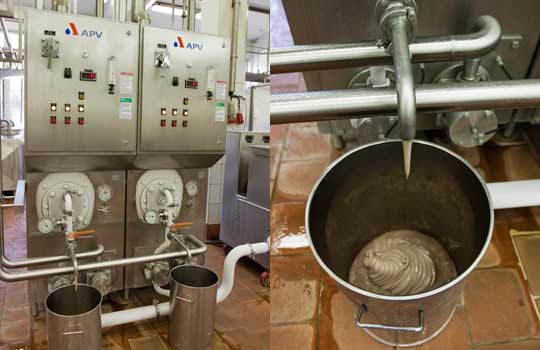 It looks like a freezer and soft ice cream

The birth of ice cream occurs in a setting called the «freezer.» In fact, this is a drum inside of which ammonia boils. The temperature maintained in this way in the freezer is -40 ° C.

The prepared mixture is continuously fed to the drum, freezes and automatically cut by special knives.

The result is a mass resembling thick sour cream; its temperature is not higher than -5 ° C. 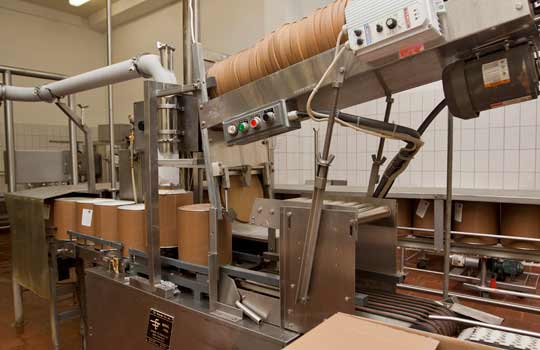 Then soft ice cream in the piping system is distributed along the filling lines. The device fills the package with ice cream, a cap is put on it, pressed through rollers — that’s it.

And also what operator stood on the line. Finished packages are placed in boxes, put on a conveyor belt, and the device makes an inscription on each box: volume, batch number, production date and shelf life.

The next unit closes and seals the packaging. 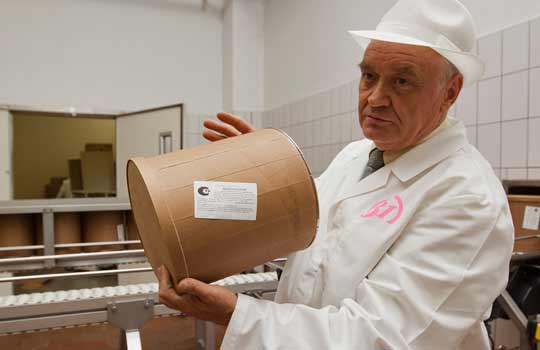 All counted and signed

The director tells us that a special tape is used for sealing, and another 3 years already. Baskin-Robbins is among the official suppliers The Kremlin, and that, in this regard, not only the factory laboratory monitors the quality of their ice cream, but also TD Kremlin. Its physical and chemical composition and microbiological characteristics are also checked.

On the one hand, this is useful, on the other, you understand the degree of responsibility.

At the factory Baskin-Robbins — four packing lines. On the first one, ice cream is packed in 100 ml cups.

A tube line packs ice cream for cafes and restaurants. 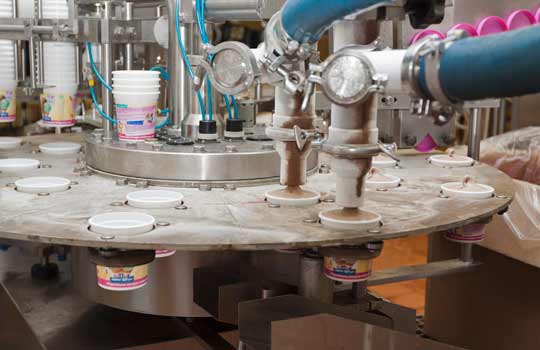 After packing, ice cream undergoes the hardening process — in the hardening chamber, where the temperature is kept at -35 ° C all year round. 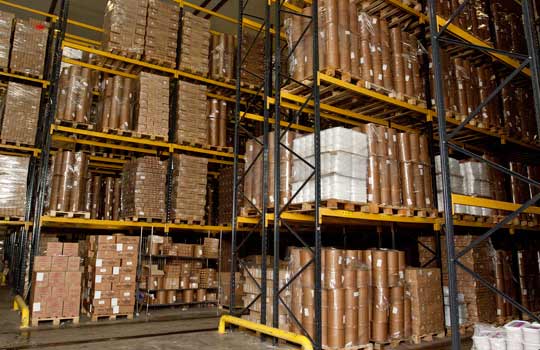 All equipment that has come into contact with ice cream at least once is subject to mandatory washing. First, all equipment and containers are washed with an alkaline and acid solution, and then with water. All washes are monitored for cleanliness.

The workshops are also constantly washed with a disinfectant solution.

The company has its own sewage treatment plants, which are under the continuous supervision of environmentalists. 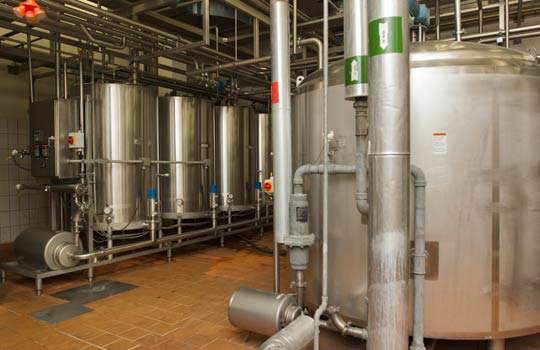 The situation in each workshop, in each tanker, mixer and pipeline is displayed on a computer monitor.

You can find out the fullness of the tanks, the current temperature of the mixture and the temperature in all rooms.

If a failure occurs, the error is immediately displayed on the panel, and the operator sends the right specialist to correct the error.

Each batch of finished ice cream evaluates the quality assurance department. To do this, one package from the party is removed from the conveyor and tasted. If there are any flaws, they are eliminated.

If the claims are more serious, the batch of ice cream is completely withdrawn from circulation. 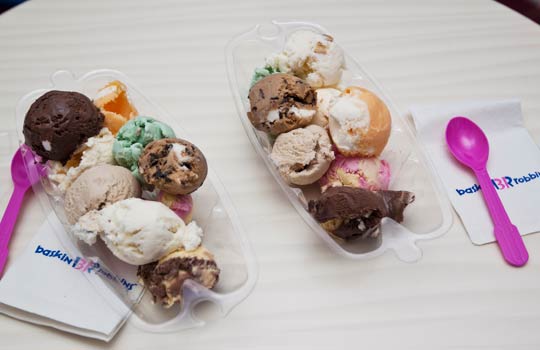 There is a cafe at the factory: after the excursion you will surely be treated with a good portion of ice cream

When asked about his personal preferences, the factory director answers that he has tried about 200 items of ice cream in his entire life.

The Moscow factory produced 129 species during its work, but he was lucky to taste ice cream in both the USA and Canada.

At the same time, he personally loves “rainbow sherbet” from coconut, pineapple and raspberry ice cream — in 95th year, he first tried it in the USA, and could eat it 8 or even 10 balls. Now Vladimir Pimonovich Egorov eats 200 grams of ice cream every day, 22-25 kilograms per year.