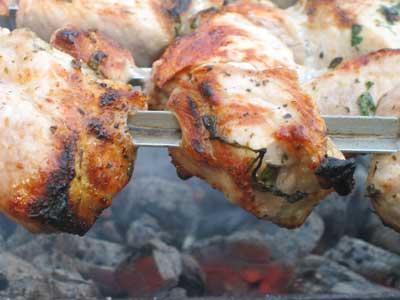 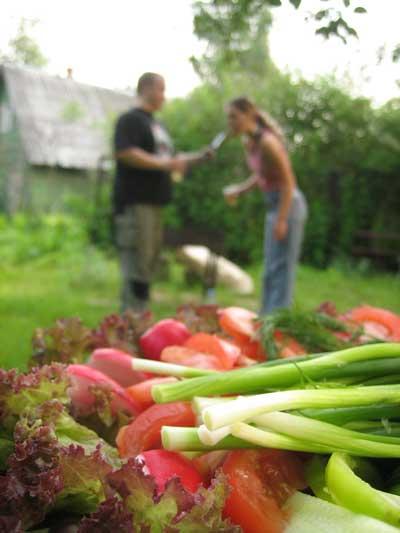 With all its wide popularity, barbecues are often cooked somehow. To find out how to do it right, I turned to the undoubted authority in this area — the president of the Russian Barbecue Society Artem Yengoyan.

Many things he told wounded me in the heart.

First, the meat. Of course, not frozen.

Pork or lamb. Loin The definition of the loin came to us from the Soviet past (and thanks to him, the past, for this definition): from the fourth to the seventh vertebra and fifteen centimeters along the edge starting from the spine.

As for lamb, half a year is the deadline for slaughtering.

However, a pair of lamb, you are likely to fall New Zealand, which is just not calibrated, or Halal grown in Russia, that is, corresponding to strict Sharia rules.

In short, good lamb (the question of money, we do not discuss here).

With beef, the situation is very controversial. On the one hand, no matter how you cook it, beef and even veal will always turn out tougher than lamb and pork.

And on the other — we can not expect that nature itself will take and roll out a barrel of favors! And now massagers for meat were invented, reducing his uzharku from 52 to 30, and even up to 15 percent.

In general, there are shifts.

Still, beef is much better suited for eating in the form of steak, cooked not on a skewer, but on a hot baking sheet.

Properly cut the finished piece of meat — a kind of art.

A large piece is best cut vertically, across the grain.

From this it will not become more tender, but it will be much easier to chew it.

Only the highest quality meat, such as tenderloin, can be cut along the fibers.

Pork chops before cooking should be greased with vegetable oil.

If desired, the meat can be given additional flavor by adding seasonings and spices to the oil — chopped marjoram, rosemary, or whole sage leaves.

To the tip of the rib, for which it is so convenient to hold a chop, not charred during frying, it must be wrapped with foil.

The fish will remain juicy if you try to preserve the skin as much as possible during cutting (without scales, of course). Wipe off the fish — it should be as dry as possible.

Turn it when frying gently and preferably less.

The cooking time depends not on the weight of the fish, but on the thickness of the piece. Each centimeter of thickness will take approximately 3 minutes.

The product is ready when white juice comes out on the surface of fish pieces, and if you fry it whole, when the flesh around the ridge gets a pinkish tint. Fish steak is considered ready, if the spinal bone can be easily separated with a knife tip.

A flat fish is placed on the grill first with a light side.

Game and young birds are best cooked on a spit.

Spit can be replaced with two steel skewers.

The first skewer is passed through the wing, the skin of the neck and the other wing; the second is through the thighs and the carcass.
For turkey kebabs are great not only breasts, but also hips.

It is only necessary to release them from the skin and bones, and then cut into pieces.

Now about the wood.

In ancient times, when spices were worth their weight in gold, it was the wood burning in the fire or hearth that determined the flavor of the dish.

Know: alder is good for salmon, turkey, chicken; apple tree — for chicken, pork, beef, game; cherry — for duck and other poultry, lamb, hamburgers; grapevine — for steaks and other meats, seafood and snails; maple — for chicken, seafood, pork; birch — for meat and chicken; Oak — for meat, poultry and seafood.

Softwoods are suitable exclusively for fires, where they play on upset guitars about “skiing by the stove,” and then they pour vodka up to the very hood.

Firewood for a kebab should be neutral or highly positive by smell.

In addition, they should keep their heat even as long as possible.

The best fuel is dry grapevine.

In the second place — wood trimming of any fruit trees, from apple to pear. This is followed by oak and beech. Lower level of fitness — birch.

Of course, the above-mentioned finished coal is good.

But keep in mind: before you light it, you must prepare absolutely all products.

You will not have the time, which is usually given to you by flare-up, and then burning firewood.

To prevent the products from sticking to the grid, it must be oiled or greased beforehand.

Here is a simple and elegant way.

Take with tongs a piece of fat left over when cutting meat, or just a piece of bacon and calmly lubricate a well warmed grate.
And nevertheless something will burn to the lattice. You can clean this “something” by leaving a grate above hot coals. Or rubbing it with a metal brush.

And it is better to combine both ways — burns more easily come from hot metal.

Finally, there is another problem, as fundamental as the egg dilemma described by Swift.

It is a matter of holding fluid in the meat.

The first point of view prescribes turning the meat once, before frying one side of it before a completely noticeable crust. The second one advises to turn over the skewer often, since the crust on the meat, which prevents evaporation of the juices, is formed with proper frying almost instantly, but remains invisible for a long time.

If the grill is hot, the heat is even, use the second method; and if the coal is running out, then the first one.

It is difficult to bring any specific recipes for cooking kebabs, since our already almost native kebab is rather a way to have a good time than to test recipes.

But some general rules, of course, exist.

There is no single and correct marinade recipe for everything.

Preparing products for a barbecue, we are trying to solve a three-variable gastronomic equation.

The first is the quality (age, maturity, fatness, etc.) of the product.

The second is the time we have.

And the third is our and our guests taste habits.

Here are examples of the preparation of products in the style, so to speak, «naturel».

Lamb, young mutton, steamed pork neck and beef tenderloin can not be pickled at all: their taste is too tender for that.

Pork is best marinated with chopped onions. Put a layer of pork thick in one piece in an enamel bowl, lay the onion rings on top; repeat the manipulations until the meat runs out.

Or until the pot is full.

Cover the saucepan with the lid and leave to marinate at room temperature (or slightly below). The next day, this pork can be fried in seven minutes. A day later — for four.

Onions before frying must be removed.

And another thing: pork must be roasted.

To marinate lamb, take red wine vinegar, dilute it in water in a ratio of one to ten, and very carefully sprinkle each layer of meat during marinating.

Fish can be treated similarly with tarragon vinegar.

And marinate it should be in the fridge overnight.

Most often, and not always to the point, use compositions with an acidic base — vinegar, lemon juice or tomatoes. This marinade destroys muscle fibers.

If at first the “burned” surface of the piece keeps all the juices inside, then after a few hours the meat loses moisture and becomes tough.

After 10-12 hours, the sour marinade is already beginning to “cook” the meat, it becomes like rubber.

To avoid this, add vegetable oil to these marinades.

Lactic acid really makes the meat more tender, but at the same time does not “cook” it.

Now — what to do in no case be impossible.

It is unnatural to pour meat with vinegar.

It is uncivilized to fry kebabs without removing the hard ingredients of the marinade.

And it’s just silly to pickle a chicken with onions — it loses its taste because of that.

Pieces of kebabs are removed from the skewer using the same pita.

Pita is soaked with juice, flowing from the meat, and acquires a special state.

It becomes a self-sufficient dish.

The audience gathered at the kebab, at the time of its submission to the table (more precisely, to the tablecloth) should already sit at the table and in impatience swallow saliva.

Having bitten off the first piece, everyone will also survive a certain special state.

2019-10-03
admin
Предыдущий Skewers: do not waste your time
Следующий Switzerland: where to go and what to try